What to do if an insured driver crashes into you

This fact by the Motor Insurer’s Bureau (MIB) will amaze you – one in twenty drivers on British roads is uninsured! 20,000 road accidents are attributed to these drivers, which causes a 500 million pound dent in the UK economy.

In as much as the number of uninsured drivers dropping from 1.8 million in 2005 to 1.5 million in 2008, there is a high chance that if you get involved in an accident, the other driver may be driving an uninsured vehicle. 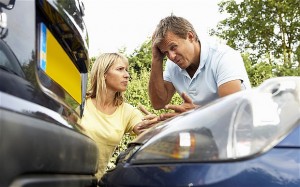 Most drivers who are uninsured fall between the age bracket of 16-25 because they find it expensive to insure their vehicles. With a large number of uninsured drivers on British roads, the insurance rates will most definitely remain high. You never know when you will get involved in an accident with an uninsured driver; therefore you need to know what to do when faced with such a situation.
British law provision for uninsured cases
The British motoring law, which was last modified in 1991, requires every road user to get insurance cover against damaging of property and injuring other people. The party involved in any situation is covered against any damage that is caused. Most insurance plans leave out protection against uninsured drivers.
Accidents are inevitable, and in most cases, the damage can be covered by the insurance cover especially if there is adequate evidence. If you or the other party is insured, the case can be handled outrightly and forgotten. What happens if the other party is not insured?
Which penalties are faced by an uninsured driver?
It is a well-known fact that the government has set stiff penalties for uninsured drivers. These include spot fines of up to 100 pounds, vehicle seizure and if the insurance is invalid, the car can be crushed. Despite these penalties, UK roads still have more than one million uninsured drivers.
The uninsured drivers can attribute their decision not to get insured to the prevailing harsh economic times. 900,000 of these group of drivers are 30 years and below. This practice is most common in male drivers between the ages of 16 to 25 years old. Surprisingly, this is the age group that requires insurance and whose rates are high.
What happens when a crash involves an uninsured driver?
Because the uninsured driver will not be able to meet the costs of damages to your car, then you end up being the one paying for a mistake the uninsured party made. Having comprehensive coverage will not give you a reprieve, because most cases involving an uninsured driver will not be supported.
It does not matter whether the accident is major or minor, because either way you will have to claim your own insurance which will increase the rates charged on basic insurance as well as remove any chance of no claim bonuses.
Sources from MIB attribute increases in insurance rates to the large number of uninsured drivers on UK roads. Policies have been noted to increase by up to 30 pounds for each policy. So, what should one do?

Damage to your vehicle – note down all the damages to both vehicles.
Prevailing conditions – Write down the nearest road signs, weather conditions, time and other details.
Take photos – to support your notes, if you have a camera you need to take photos from different angles. Try to also take a picture of the other driver’s face as well as having him take yours.
Get an accident report number – incase the police were informed and are at the scene of the crash, request for an accident report number. You’ll be faced with a repair bill that you shouldn’t have to pay for, so you need to make sure you get as much information as possible to support your case. If your car is badly damaged, Howard Basford can repair your car – visit their site for more information.
What next?
After you have collected all the information from the site of the crash, you need to know what to do next. Because your insurance cover will most likely not handle the cost of damages, you are left with two options:

Trace the other driver and take the case to a small claims court. This is usually risky because the other party may not be in a position to pay the cash.
Register your claim with MIB. This, as compared to the first option, is a better approach because you will most likely get compensated because the company offers clients with services to deal with uninsured drivers.